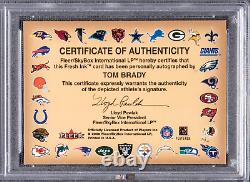 With the relative few autograph rookie cards for Tom Brady, the very popular, but currently undervalued Fleer Autographics draws all the similarities that make Playoff Contender Championship Ticket rookie autographed card consistently sell for over a million dollars in a BGS or PSA 8 to 8.5. They are both extremely condition sensitive cards, thanks to so much edge and corner chipping, not to mention the extremely off center cuts you would normally find in the regular, silver and gold Fleer autographic editions.

With 100 Playoff Championship Ticket Brady rookie cards made, the fact that there are only 50 of the Fleer Gold Autographic cards, makes it twice as rare. Even so, both are extremely rare compared to his other 2000 edition. Rookie cards found on the market place. It is true that the Playoff Contender Championship Ticket is currently the more valuable of the two, but after being a collector for over 40 years, I can tell you that this will change as true collectors have a harder time finding the Fleer Autographics Gold, due to its incredible scarcity.

The same will likely happen with the Score Rookie Roll Call card, since there were only 50 of those autograph cards made as well, but that one is not as popular as the Fleer Autographics at this time, so the Autographics Gold is definitely next in line to sell for well over a million dollars. This is not just made up speculation, since I can easily cite examples of. Situations producing that kind of result. The most recent example would be the 1996 E-X2000 and E-X2000 Credential Kobe Bryant rookie cards that eventually overtook Topps Chrome and Chrome Refractor Kobe Bryant rookie cards in value realized from true auctions. The E-X2000 was always fairly popular, but not as popular initially as the Topps Chrome. This PSA 9 Tom Brady is a stunner that would easily grade a BGS 9.5 and was likely very close to a PSA 10, but either way, it is the second highest graded Fleer Autographics Gold card, with it being the only PSA 9. While there is one PSA 10, there are no BGS 9.5s and the two BGS 9s both are rated an 8.5 on centering and 9 on corners, which you can clearly see is not the case with this Tom Brady Gold edition Autographics card, since it has virtually flawless edges and corners. So, this is clearly the second best condition example in the world. For value comparison, there are 7 graded BGS 9 Tom Brady Playoff Contender Championship Ticket rookie cards and the only ones for sale recently have been some of the 26 total 8.5 BGS examples and those have gone for approximately 2 million dollars recently. That makes this card priced on the low side even at 2.7 million.

Tom Brady is far and away the greatest player of any sport and collectors appreciate his dedication to the sport and winning spirit, as well as his ability to accomplish what no other athlete has ever accomplished by racking up more titles in a game that doesn't allow most players to get even a 1/3 of his longevity, or even 1 championship title, let alone 7 going on 8! The item "Tom Brady Fleer Autographics Gold 2000 PSA 9-Rarer Than Playoff Contender Ticket" is in sale since Thursday, May 13, 2021. This item is in the category "Sports Mem, Cards & Fan Shop\Sports Trading Cards\Trading Card Singles".